When you look into the eyes of an Anatolian, you're looking into their soul.

We are moving! We will be staying in the Central PA region but will be moving about 45 minutes away. We now own a larger farm and orchard  of 17 acres in South Central PA. The new home is still to be built but we are beginning to move things out and setting up the new property. This is going to be a huge move to move an entire farm. All animals are going with us.

A lot of people have been inquiring about pups. I am still planning a couple of breedings in the near future. Things are just up in the air right now due to when the move takes place. If you are interested in a pup, please contact me to get on the waiting list. Also please bare with me in response times to e-mails as I have been extremely busy going between the 2 properties, packing and moving things and trying to get our current home ready for sale. We are still here and will still be having litters! I do apologize for the web site being pretty behind in updates too. Times have just been very hectic lately. If you want to reach me faster or to see more recent photos and updates, please feel free to reach out on FB since I have easier access to messages.

This website has been created for anyone interested in Anatolian Shepherd Dogs. It has some information on the breed and it has a lot of pictures to enjoy. It'll give you a chance to get to know my dogs and my experience with them. This site will be updated from time to time with recent pictures and blogs, so keep checking back for updates. This is just intended to give those interested a little insight into the breed and also to sit back, relax and enjoy.

How I got into Anatolian Shepherd Dogs

Dogs have always been a part of my life. I was raised around Siberian Huskies, Alaskan Malamutes and German Shepherd Dogs. I got my first dog at the age of 7. I've had my own dogs ever since.

Back in 2004 I attended my first dog show. I was looking into adding another dog to my family. I had what I was looking for in mind. I was talking to some people of a breed that I was interested in and meeting some dogs. When I was walking away from the ring after talking to the handlers/owners my Mother stopped me and asked "What kind of dog is that?" I didn't even see what she was talking about at first. Then I saw it. I had the name on the tip of my tongue but couldn't get it out. I had never seen one in person and never expected to see it at the show. It was an Anatolian Shepherd Dog!

I just stood there and stared at it for what seemed like forever. I locked eyes with the dog from across the room. It was a look I'd never forget. It was so magnetic. That image stayed in my head for the rest of the day. It's still in my head to this day. We were in a hurry to get seats for the main show so I went on about my day but kept thinking about the dog I saw.

Later that night after the show, I was sitting at home relaxing and looking through a book that I had bought at the show. I came across the working group and there was the Anatolian Shepherd Dog! I had known the name from seeing it briefly before but never really looked into the breed. I read about it and it seemed like the perfect dog for me. It was everything I had ever wanted in a dog.

Over the next few months, I researched everything I could find on the breed. The more I researched about them, the more I fell in love with them. The history of the breed just amazed me too. I read everything I could find and even called some people that owned them so I could talk to them and find out more about the breed. The Anatolian Shepherd Dog was the dog I was looking for. I decided to call a breeder to see about possibly getting a pup, then a short time later I had my very own Anatolian Shepherd Dog.

I knew after my first Anatolian Shepherd Dog came home that this was going to be it for the rest of my life. They bring so much joy and happiness to my life and have taught me so much about life and about myself. Every day is a new learning experience. Once you think that you know them, they do something to throw you off and every day I'm still learning about myself because of them. I will always have Anatolian Shepherd Dogs in my life. I've got the Anatolian Addiction! You can never have just one!

The dogs on this website are my companions and home/family/livestock guardians. PLEASE do your research if you are interested in getting an Anatolian Shepherd Dog. I cannot stress that enough. Make sure this is the right breed for you and that you learn all you can before deciding to add one to your family. Make sure the dog fits your lifestyle and your needs. You also need to be the right owner for the dog. These dogs take a firm but loving owner. They need to know that you are the boss and not them. It also takes patience to work with these dogs. If you want a dog that will obey your every command and respond to you quickly, then this is not the breed for you. If you think you are making the right decision by adding one to your family, then please contact us. We will breed litters occasionally. If we have nothing available, we can help you find another reputable breeder or you can even look into the breed rescue. Whatever you decide to do, make sure you are making the right decision for both you and the dog. 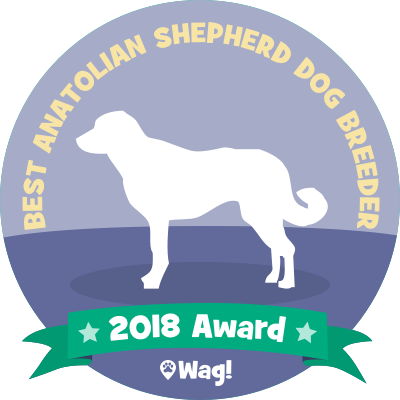 Mystic Anatolians based in Pennsylvania is a Top 2018 Anatolian Shepherd Dog Breeder! 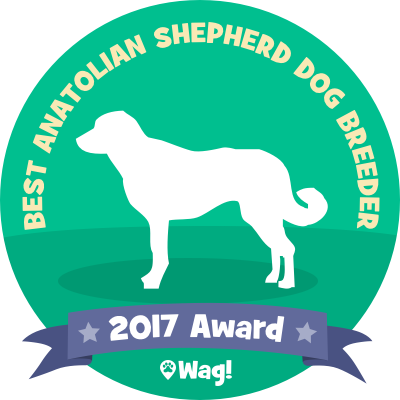 Mystic Anatolians based in Pennsylvania is a Top 2017 Anatolian Shepherd Dog Breeder!

Copyright ©2007-2019 MysticASDs All rights reserved. No images, text or portions of this site may be used without written permission from the owner.